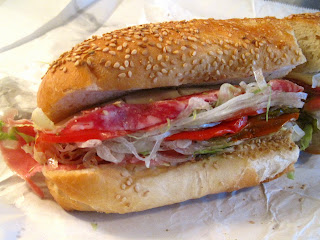 Is it possible that I have never written about Cosmi's here before, aside from the Best Of Philly 2008 post? Anyway if you don't know it's one of the best hoagies in the city. Really a toss up between them and Chickie's. But Cosmi's gets bonus points for being open late and on Sunday.

Folks swear by their cheesesteaks but I have to admit, In the cheesesteak realm I am more a fan of the popular, less authentic whiz and soft roll variety. But on a Hoagie I want mortadella, capicola, sopresetta, the good stuff, and lots of it, on a seeded roll with some longhots, and you can't get that at Wawa. 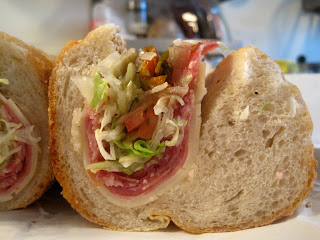 Sure you can get something like this on foccacia bread in center city but when I eat this kind of sandwich I want to feel 200 years of mummers and fat guy playing cards on the corner south philly history in every bite. They also do every kind of cutlet and parm sandwich as well as a flounder hoagie. Plus in the summer they have fresh jersey tomatoes. Heaven.