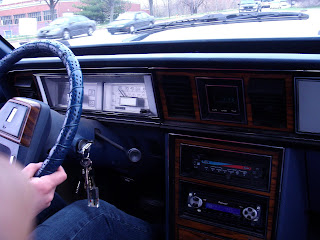 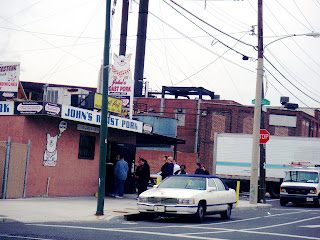 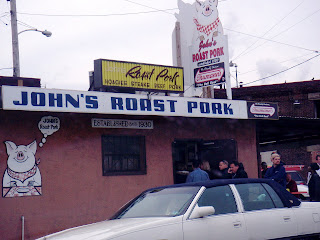 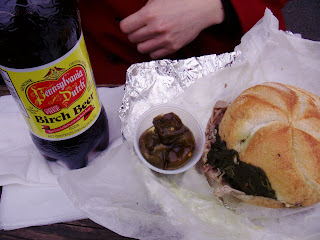 Holly's Eats gave John's Roast Pork 5 grease stains, there is a James Beard Award, there is a line going around the corner, this place needs no endorsement from me.
I went with my foodie co-worker Lilly in her Carnaval Cruise of a car down to the wierd alley between Target and Ihop in South Philly to experience the infamous John'sRoastPork.
Nothing was more awkward than 2 girls in this line were we obviously stuck out. Between the Eagles jerseys, construction workers, and the South Philly regulars we were in for more than we thought.
There is a line just for the Pork. All other sandwiches get a different line. The grandma is roaming around behind the counter. It is also just a counter, you sit outside on picnic tables. There is no broccolli rabe, Lilly tried, spinach only. Sharp Provolone is 50 cents extra, but do it, it's so worth it.
Lilly and I just got smalls but really we should have gotten the large and split it. Because we missed out on that sweet seeded long roll that would have handled the pork drippings way better than our round roll. My roll fell apart pretty quickly, there was too much of this delicious moist roast pork falling out. We were both surprised how much we enjoyed the sandwich because there was no sauce or condiments or anything. It actually kind of reminded me of Kalua Pork from Hawai'i with the it's juices and the spinach. Highly recommended, but you already know that. 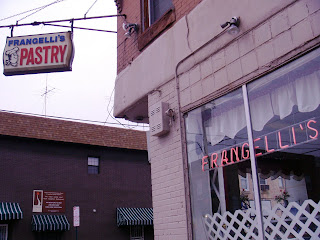 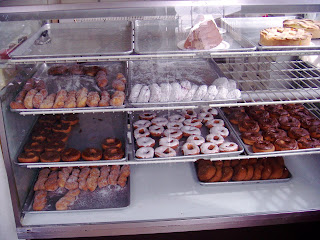 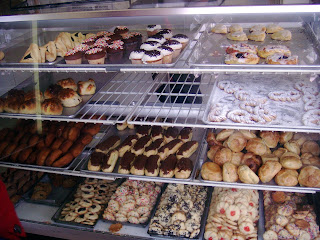 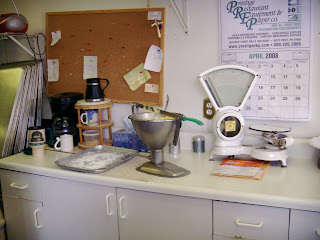 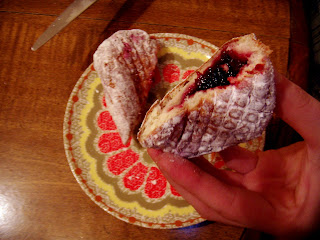 I'm not a big italian pastry person I admit. The pastries always seem dry or missing something. Sure I love a good Ricotta Cannolli Riccotta Pie, and Tiramisu but it doesn't float my boat the way a tarte tatin does.

It's because I was missing Frangelli's Bakery this whole time. Best Homemade donuts in the city on a daily basis. The Glazed Donut hands down love at first bite. The Twist, light and soft and not to sweet. THe Jelly donut, is no joke, filled with some kind of mixed berry jam concoction. The Crullers, Vanilla and Chocolate, delicious. The cream donuts are just the shell when you get there and they pump the fresh italian custard in while you wait.

I took a picture of the custard donut pumper, the ladies were somewhat shocked I had never seen one before. Where would I have seen a custard pumper? It also pumps the jelly.

They also have fresh sticky buns, spice cake, tea biscuts, and the loveliest looking triangle pound cake with chocolate frosting on one side and vanilla icing on the other.

I will never go to another italian bakery again.

Frangelli's Bakery
9th and Ritner
Posted by Kris Chau at 8:39 AM 1 comment: