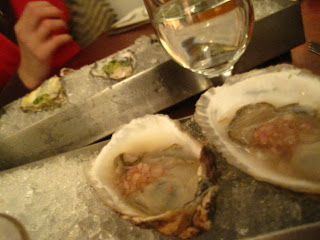 Occupying the former location of Astral Plane is fish, chef Mike Stollenwerk's 3 month old center city cousin to Little Fish, a south philly BYOB where I've never been - and apparently have been missing out big time.

I'm not huge on ordering fish at restaurants, mostly because mediocre establishments tend to keep fish in the boring world of salmon with dijon or tuna with wasabi mashed potatoes. Not that I don't like these things but I'd rather cook them at home and try new stuff when I go out.

The menu at fish is fresh and exciting - not a single seared salmon in sight- but not so weird that you couldn't bring your grandmother. Everything was good and a few things were incredible.

Started with oysters with banyuls mignonette, right on the oysters not on the side. And another dozen with cucumber and lemon. Takes some balls because some crank is going to send them back and ask for cocktail sauce. Anyway, great oysters - good selection ranging from mild to super briney - all fresh, delicious and perfectly shucked, no dirt or pieces of shell or busted up oysters. 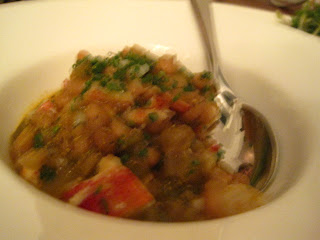 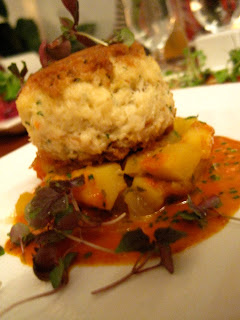 I wish I had a bowl of the lobster with white beans in front of me right now. Basically a lobster chili, super comforting with that deep flavor that you usually only get from real mexican food. I'll go back just for this.

The peekytoe crab cake also blew me away. Crab cake is usually the #1 contender for mediocrity on every menu unless you're at a shack on the ocean that is literally pulling them out of the water in the back. But this was anything but. Ratatouille sounds like a strange combination but it was awesome. And the crab cake itself was possibly the best I've had in a 'fine dining' setting. 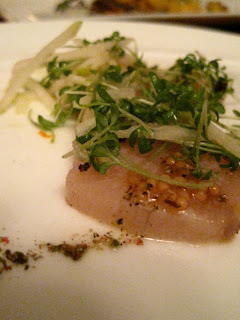 My skate wing with truffled spaetzle & leek fondue was fantastic. The parmesan broth was similar to a sauce we used to make at BP for the braised chicken gnocchi ... the kind of thing that made all the screaming and flying pots & pans worth it - although Stollenwerk's sauce was lighter and probably doesn't have bacon in it.

It was a flavor that I've been missing and this brought me back in a big way to what I love about this kind of food. Less gimmicks and more delicious flavors executed perfectly. And real truffles. 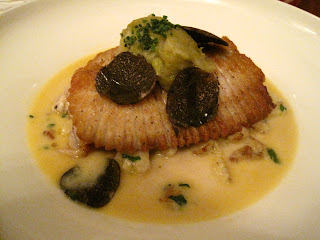 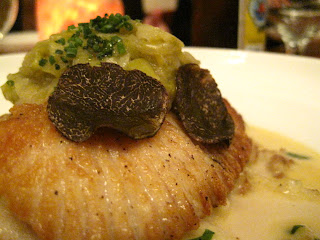 Also fantastic was the snapper with merguez sausage and paprika. Then giant scallops with butternut squash, Israeli couscous and curried mussel broth, seemed like a lot of competing flavors to me, especially compared to the simplicity and harmony of the other dishes.. but everyone else at the table loved it.

Nice cocktails too, on the old fashioned / retro side of things, and great to see belgians, local beers, pacifico and miller lite on the same menu. The overall experience was outstanding. For a nice dinner in the Rittenhouse or Graduate Hospital area I would recommend Fish without hesitation. 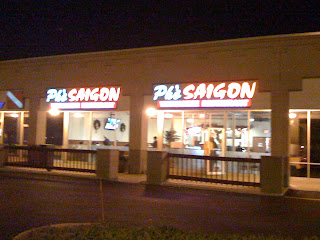 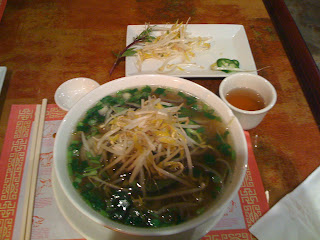 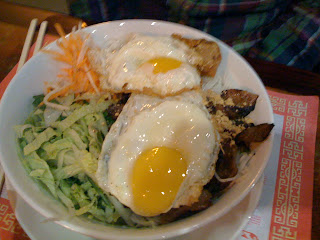 Pho Saigon is my new pho haunt. But I need a car to get there, so anyone who reads this please invite me. I dont really need a car but its harder to get to then all the other ones near Washington.

What I love about this place is that it reminds me of California. Because all the good food in California are in strip malls, it's a given. So Pho Saigon is in a strip mall, it's super clean ( clean for the asian eating standards ) and it has slightly hilarious outgoing Vietnamese waiters. Which took me by surprise in Philadelphia. The vegetables and the meat taste really fresh, my beef comes out bright red rare in my Pho and they have the BBQ pork summer roll. They also indulged Jenni by giving her 2 eggs on her BBQ pork vermicelli bowl, genius, yes. 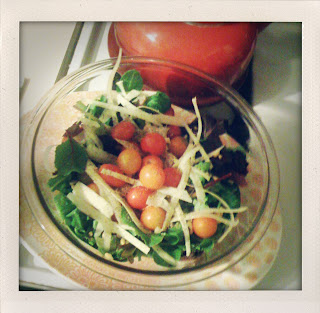 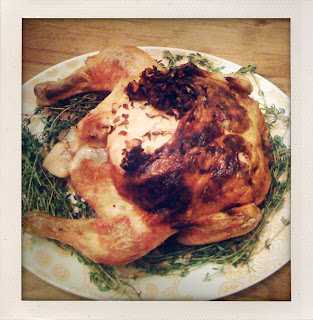 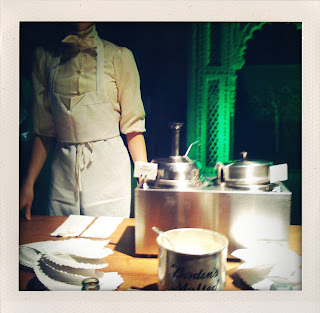 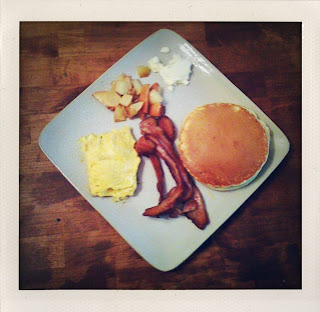 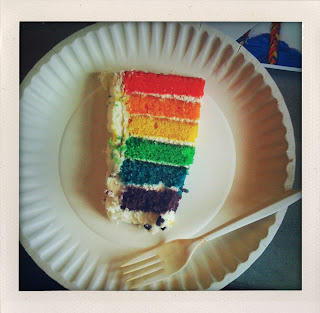 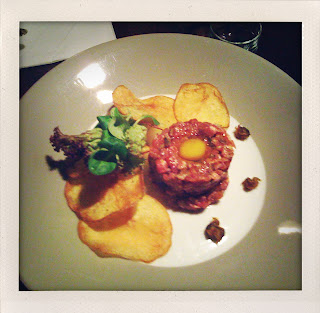 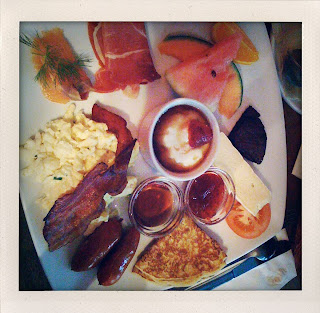 Here are some food photos that I have failed to post,so there will be no where's when's and how's, just food for the eyeball. 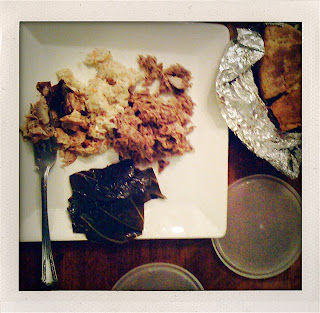 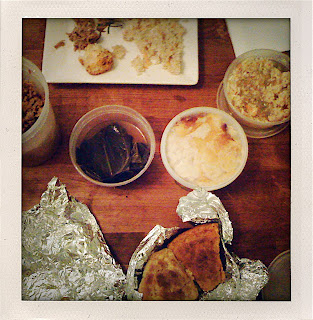 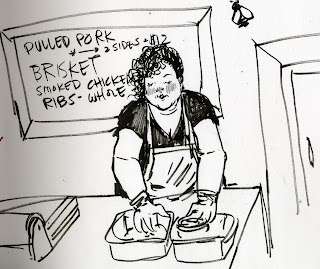 I know I'm late on this BBQ posting, because Bebe's has been open for a while now, and it has lovely reviews so there's no reason for me to wait this long. I've been trying, their hours have just been extended and now they have delivery ( YES!) South Philly just got sweeter.

So were going to take our pork focus away from hotdogs and to Bebe's beautiful pulled pork. Which lovely Tamara, my biscuit angel, pulls from the bones and chops up right in front of me and drenches in their North Carolina style sauce. Everything of course was awesome and I don't have a single need or want for anything more. I am normally a sucker for sticky sweet tomato based BBQ sauces, but everything about Bebe's BBQ was done with love, detail and care. So there was no need to hide mediocre meat behind a sauce, at Bebe's everything was moist delicious and the sauce complimented the meat perfectly.

What made visiting them on Sunday a little bit more special was the smoked chicken, which for a pork lover like me, actually swayed me a little bit. It was amazing. The spicy biscuits were so good I don't think I came up for air or spoke until they were all gone. And to top it off was the most perfect tiny pecan pie.

It was a great way to end a year of good eating. 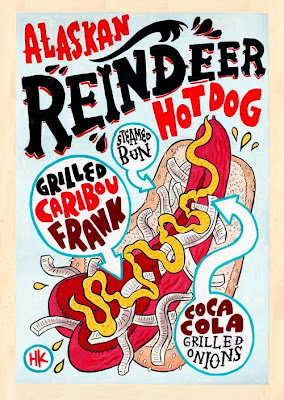 Mike of MA's and Biker Jim (who happen to be old kitchen buddies) both serve their caribou dogs with grilled onions cooked in coca-cola. Biker Jim adds cream cheese from a caulk gun, Seattle Style.
Posted by hawk krall at 5:07 PM No comments: 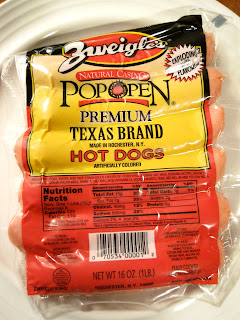 Picked up some natural casing NY state hot dogs at Wegman's in Collegeville, PA. Got a pack of Zwiegels 6 to a pound "Texas Hot Dogs" and a 3 pound pack of Sahlen's for the freezer. They also had Zwiegel's White Hots - a pork,beef and veal uncured dog unique to Rochester.

This is particularly exciting because these products are extremely hard to find in Philadelphia, if not impossible. Normally eating these dogs would mean a 6 hour car ride to Buffalo or Rochester. 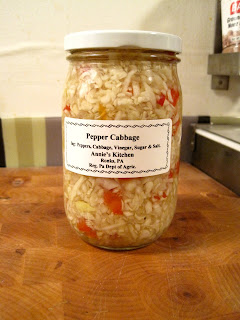 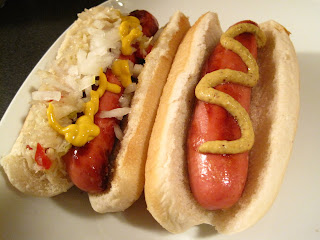 The Zweigel's were the best. Pan fried in butter and topped with mustard. Also tried one with onions and a mound of real PA Dutch pepper cabbage from the Reading Terminal Market - which I realize is complete regional blasphemy but it was delicous.

The Amish pepper cabbage was more briney and sweet than the pepper hash you would find on a hot dog at Moe's or 25th & Passyunk. More of a pickled flavor, like cabbage relish, but still delicious on a hot dog.
Posted by hawk krall at 5:02 PM No comments: 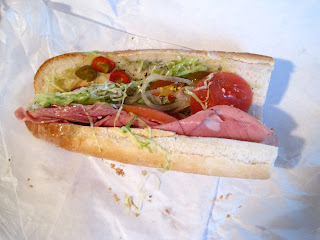 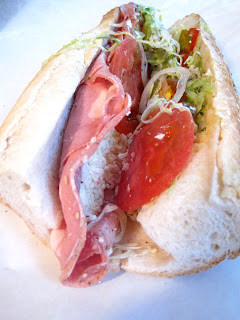 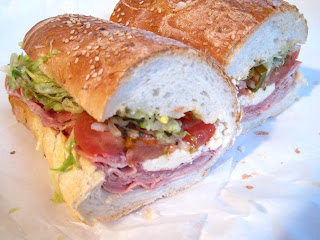 Haven't been to Chickie's in a few years, ever since Cosmi's became my hoagie spot.. Still amazing. Just got the standard Italian which here includes Genoa Salami, Coteghino and Mortadella. I love how they just sort of crumble the sharp provolone instead of trying to slice it or something.

Chickie's has also got some new specials going on like a fried tomato & bacon hoagie, sort of an italian fried green tomato BLT.
They're been on plenty of Best Of Philly lists and it's well deserved. 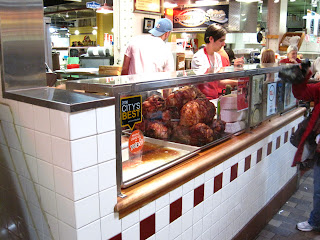 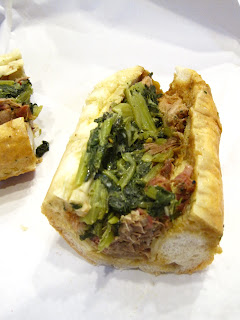 Word is that the Pulled Pork Italian (different than roast pork) is the way to go at DiNic's in the Reading Terminal.
Yes. Delicious.

Still no vote from me on the best pork sandwich in Philly. Although I'd put this up there with John's and George's on 9th street. (The one that was on the Sandwiches That You Will Like PBS show). Haven't been to Paesano's yet though, I hear good things....