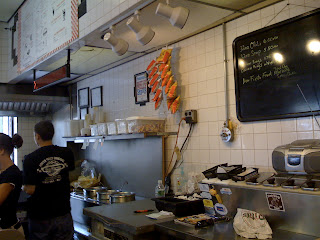 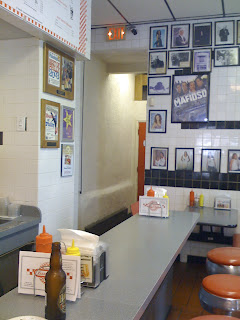 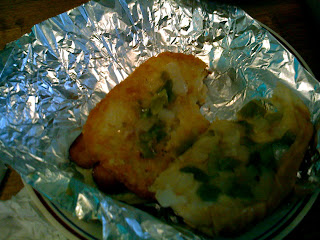 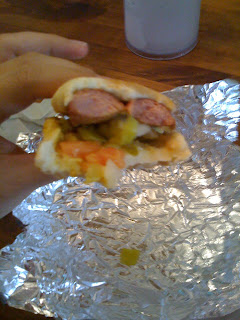 This place has great T-shirts, good lookin' dive-like outside, and a great name. It's probably high on the Philadelphia road food hit list. And its's also right by my house. So while Hawk is running around eating fine dining in his nieghborhood, good ol's South Philly's got my back.
The hot dogs were suprisingly (because I was suspect)delicious and flavorful, since they dress the entire dog for you. I got the Chicago, which included peppers, tomatos, mustard, and relish. I really love how they split the dog down the middle and grill it. Tim got one that had a potato cake in it, yummy.
The inside is also a surpise, with a mini diner look. I love the Mafia and Italian references everywhere.

So for whatever reason I've eaten out about a hundred times in the past few weeks, but forgot my camera every time. I usually try to focus my posts on lesser known gems, like some secret bulgarian sausage stand on a barge in the delaware river or something.. anyway here goes-

snackbar
meant to just go for a drink, but couldn't resist ordering some food.
boneless bbq chicken wings, grilled watermelon. the menu was all burgers with eggs on top, mac and cheese and smoked turkey, definitely would go back for dinner.

table 31
pork trotter in brik pastry with serrano ham and mustard sauce, and a tobacco-infused bourbon cocktail? fucking awesome.
mediocre steaks that cost half my paycheck in a restaurant that looks like a space age ruby tuesdays?
only worth it if I was a big fat dude in a suit that made $500,000,000 a year.

parc
I sort of view steven starr as the wal-mart of the philadelphia restaurant world, sucking up all the cooks and customers into establishments that are more like theme parks with assembly line factory kitchens than restaurants, robotically cranking out mediocre food to thousands of suckers that pour in from new jersey and the suburbs.

so I was ready to talk all kinds of smack after eating at parc last week, except it was really really good. the menu is classic french bistro stuff, nothing crazy but everything came out perfectly despite the restaurant being packed to the gills with about 4000 people. the place is freakin beautiful too, don't miss the antique french pin-up photos in the men's room.

lolita
great guacamole, lamb loin with huitalacoche, bring your own tequila and they make it into a watermelon margarita.
good stuff.

ruby tuesday's
so suburban casual dining chains are pretty much the bottom of the barrel, olive garden probably the worst food I've ever had in my life. I imagine the kitchens at places like this being full of drunks straight out of prison stabbing eachother in the neck over the sleazy waitresses.

but the burgers at ruby tuesday's are so good, and the atmosphere is so refreshingly un-hip, it's like being in new jersey on vacation. don't be scared.