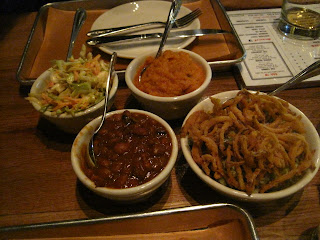 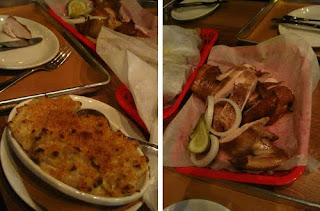 #1 of this meal was the amazing Mac & Cheese. People go on and on about places having mac & cheese "to die for" and to me most of it tastes the same or is just kind of forgettable. Percy Street's mac & cheese had the perfect amount of moisture, no overcooked noodles, not too dry or greasy, or swimming in thin sauce. Perfectly seasoned, delicious cheese sauce (bechamel family, I think) clinging to every morsel, crowned with golden brown breadcrumbs, I would come back just for this. 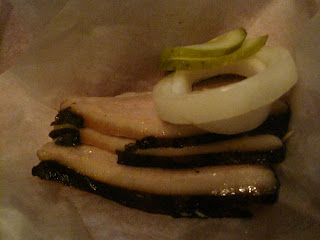 On to the meat. This is apparently real-ish "Texas" BBQ, which I'm no expert on but which they explain means no spice rubs, just salt pepper and smoke, sauce on the side if you want it, ultra simple. The Pork Belly was amazing, ultra fatty creamy slices of pork that melt in your mouth. Great ribs, chicken, unfortunately they were out of sausage and rib tips. Brisket was a little tough for us, not bad, just used to brisket being more tender, and usually my favorite thing.

I was sort of wishing for a bigger variety of sauces, like Abner's or Fette Sau who have several sauces with different levels of heat as well as a few mustard / vinegar based sauces, but the simplicity here is also a good thing.

Great place to come with a group... The "Double Down" or "Lockhart" specials for the table are the way to go, you get a little bit of everything. Only thing that threw me off a bit was the sort of faux-rustic Crate & Barrel vibe going on, like they were afraid to make it look too beat up and scare away the lunching ladies from Ardmore.

I think a more comfortable, rustic dining room similar to Cantina, and less spouting-off-memorized-menu-description professional servers would lend some authenticity to the whole experience. Anyway in the end the food more than made up for any qualms I had about the decor.

For more about Texas BBQ, check out this documentary about the Percy Street team's research trip, and two great blogs that will have you ready to hop a train to Texas....

Looks good! Many thanks for the link!!!

no problem! your blog makes me want to move to Texas and start doing paintings of BBQ.