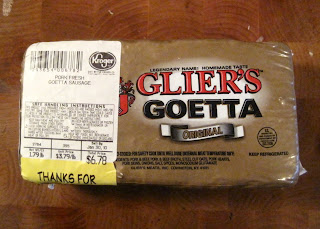 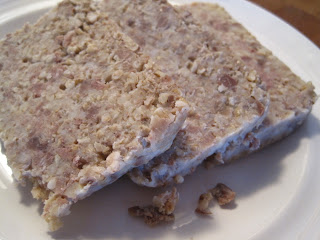 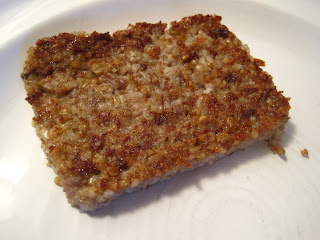 Got some Geotta for Christmas (thanks Jess) and now It's all gone. I would get some more but it's only available in the Cincinnati area.

If you don't know, Goetta is basically Cincinnati's Scrapple. Some might say it's better, but I would never take that position and insult my Philadelphia / Pennsylvania German heritage. Also German in origin, Goetta is pork and beef (including hearts and skins), combined with steel cut oats.

Cooked and served the same way as Scrapple, Goetta has more texture - due to the rough cut oats - and a stronger flavor. Don't be scared. It even converted a few Scrapple haters at breakfast the other day.

It's even prepared in the same way: boil variety cuts of meat on the bone with bay leaves and such for hours; remove meat and chop; cook grain in meat water; fold meat back in; form loaves. Maybe some celery or onions along the way.

Folks tend to look at Scrapple and Goetta as "gross" or "white trash" but really, It's a German terrine. There's even an annual Goettafest with German entertainment and Goetta Calzones.
Posted by hawk krall at 11:38 AM

When I was a kid, My Mom, a native Cincinnatian, used to make Goetta in a big pot and then pan it like you would polenta until it was firm. She'd slice it and fry it for breakfast like bacon. It was delicious -- a feast. What great memories you brought back!