After spending a week eating my way across Savannah, GA and Charleston, SC I'm left with a blurry memory of grits, sausage gravy and fried everything. In these tourist heavy towns it can be a bit difficult to sort the real deal gems from the tourist traps. There were lots of good things to eat (some of which I missed getting photos of) so I'm just going to post a bunch of my favorites from the trip.

Savannah & South Carolina are great places to eat because you get the Southern cooking traditions -fried chicken, grits, greens, cornbread, bacon in everything, 75 different varieties of "barbecue" along with the coastal "Low Country" cooking that's heavy on seafood and has a little bit of a cajun feel to it. This is where the she-crab soup, shrimp & grits, and po-boys come in, on practically every menu from the corner greasy spoon to the 4 star hotel restraurants. Oh and I can't fail to mention, especially in Savannah, southern hospitality is not a myth. 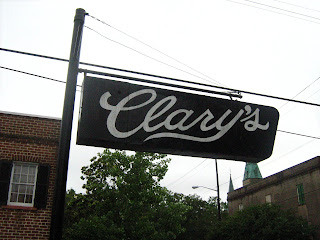 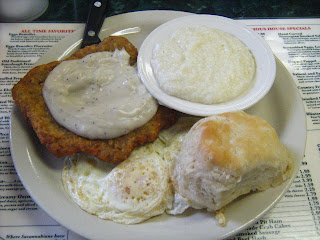 Clary's Cafe
First place we ate in Savannah. Been there since 1903 and has been in a few movies. Awesome diner vibe and lots of locals.
Great biscuits. Good Coffee. Chicken fried steak & grits hit the spot. 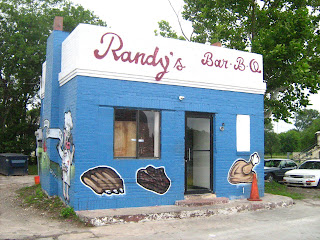 Randy's BBQ
Exactly what I was looking for. 6 giant outdoor smokers on the outskirts of town. Closed every time we drove past it.. apparently only open for lunch. Probably would have blown my mind. 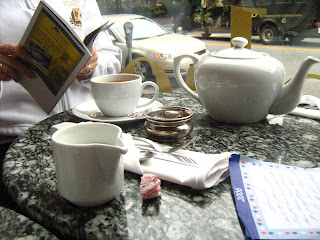 Gryphon Tea Room
Turn of the century apothecary converted into a southern tea room. 40 zillion varieties of tea brewed in your own pot. Take your mom here.

Corleone's Trattoria
Italian in the south? Fried calamari and Sweet Tea? I thought it was going to be disgusting. Pastas were OK but the baked manicotti and meatballs were awesome. Great sauce. Don't be scared.

Red Velvet Cake at Mom & Nikki's
Red velvet cake is not as easy to find here as the food network would have you believe. Mom & Nikki's was closed when we got there but they let us in to take out a giant slice of red velvet cake. Which was great. Super moist with a hint of chocolate and cream cheese frosting with shaved pecans. Apparently this is the place to go for smothered pork chops and mac & cheese.. next time I guess. Warning- everything in Savannah has crazy hours. 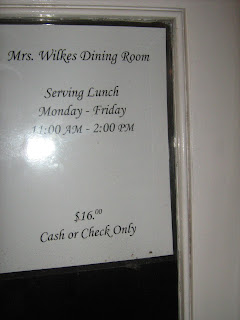 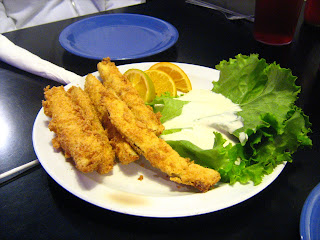 Amalfi's
Italian food in the south again? In a Best Western? Tables full of sad looking tourists and traveling businessmen? Surprise! The owner is a super excited guy born in Naples who grew up in New York City and walks around talking to everyone. The pizza was AWESOME, total shocker. Great crust, great sauce, real toppings. The next day we were having cocktails at the hotel bar and the owner popped up again with complimentary home made limoncello?? Maybe he knew we were from Philly? Probably the least touristy place we found in Charleston, in a freaking motel. 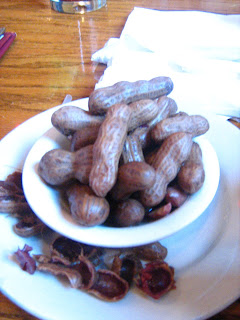 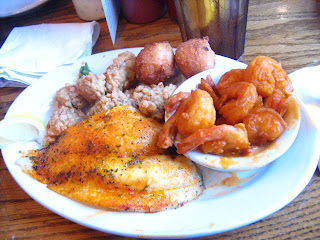 Hyman's Seafood CO
Total tourist trap, seats about 400 people, buy a T-shirt on the way out. Complimentary boiled peanuts.
Shrimp & Grits were delicious. Here they do it with brown gravy & cheese almost like gravy fries. Sounds sketchy but it's great.
Ate it so fast forgot to take a picture. Fried shrimp/cajun trout/giant crab cakes/hush puppies/slaw. Not bad! 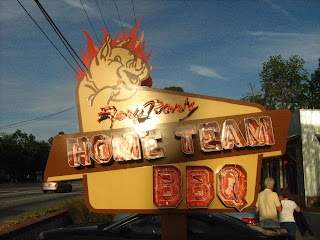 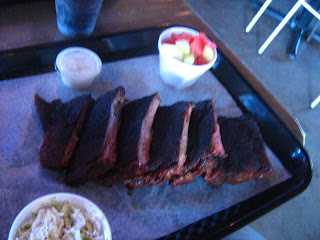 Fiery Ron's BBQ
Sort of expecting more from this gas station-turned BBQ a few miles outside of downtown Charleston. The ribs were awesome. Pulled pork and sides were so-so. I wanted to be blown away by "real southern BBQ" but I guess this wasn't the place to do it.

Calhoun Mansion (not food)
So as I've mentioned a few times, Charleston is a bit of a martha stewart middle aged crate & barrel tourist trap. Lots of faux-authentic crafts, tour buses, gift shops, fanny packs. So I wasn't that excited to go on a guided tour of this old southern mansion. Again, total shocker. This place has changed hands about 6 times since 1876 and is covered with hand painted art-deco action as well as the current eccentric owner's enormous collection of paintings, buddhist shrines, giant taxidermied bear heads, busts of african warriors, Tiffany chandeliers, a giant ballroom covered in crystal and gold with every inch of wallspace covered in massive oil paintings..

The third floor is closed because the owner still lives there while tours go on 8 hours a day. He spent something like 5 million dollars restoring it maybe 10 years ago. The only way to explain this place is like a cross between the Louvre and the house from The Royal Tenenbaums.

Cracker Barrel
Every restaurant seats about 7000 people. Awesome chicken fried chicken, biscuits, neverending refills of mello yello. And they still have those damn peg games that I can never beat.

Every exit off of I-95 below Delaware