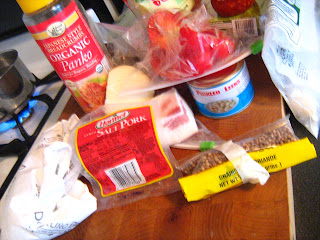 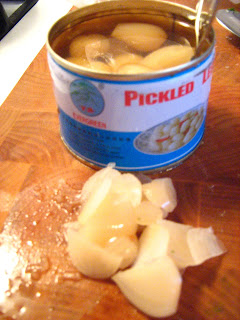 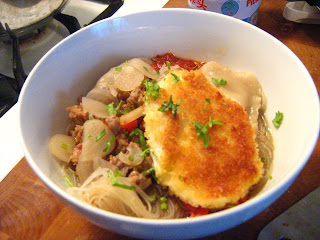 So Caroline gave me an assignment for her Cook and Tell article on Serious Eats. The idea was to make something spectacular using only the ingredients in your house, no cheating, no shopping allowed.

You might think a food blogging ex line cook would have an amazing kitchen stocked to the gills with food, but really it's just a totally random mess of strange things I bought at the asian market 6 months ago , a few sketchy vegetables and whatever is left over from saturday morning breakfast.

I threw on an "asian-y" broth with a hunk of salt pork and some chicken innards I found in the back of my freezer, along with a few of the sketchy carrots & onions, soy sauce and coriander, and some green onion & cilantro remnants.

Cooked the broth for an hour, strained out the stuff, dropped in a few dumplings I found in the freezer along with a block of rice noodles for 5 minutes. Cooked off some sausage (italian turkey sausage to be exact- this is where the fusion comes in folks) with onions & red peppers. poached an egg, battered it with flour / egg wash / panko and fried it up. threw everything in a bowl with some chili sauce and cilantro and some pickled leeks that I bought a year ago because the can looked cool.

It was actually pretty damn good.. panko crusting the egg was sort of unnecessary and a little bit weird texturally with the noodles and broth.. if I wasn't taking pictures i would have just fried it normally.

I was also contemplating dusting banana slices in vanilla pudding mix and almonds and deep-frying them, mixing some ancient frosting with molasses or something and plating it up real obnoxious-like.. but I just ate the banana instead.

If you want to join in the fun you can follow Caroline's articles over at Seriouseats.com
Posted by hawk krall at 3:27 PM

Looks awesome, thanks for cleaning out your shelves for me!