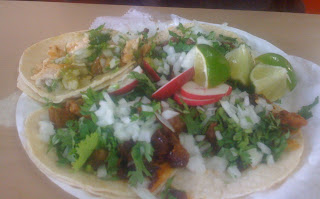 Since I've moved from back from San Diego to New York I have been trying to find a place that serves the kind of Mexican food that I have become accustomed to on the West Coast.  After a little over a year  of searching I was ready to throw in the towel and call it a day.
I live in a neighborhood that is brimming with Mexican restaurants.  Tortas, cemitas, and huaraches are everywhere but somehow they just aren't the same.  I really wanted the perfect, simple tacos that I had gotten so used to living ten minutes from the Tijuana border.  These tacos are nothing more than fantastically grilled meat on tiny (4-5-inch) tortillas, chopped cilantro and onions accompanied by some really great salsas.
I'm overjoyed to say that today I found the tacos of my dreams.
Tacos Ricos at 51st Street and 5th Avenue in Sunset Park serves the best tacos that I've eaten outside of Southern California. I had a feeling that it was going to be good and I ordered six tacos - al pastor, bisctec, pollo, enchilada, arabes and orientales.

All of the tacos were amazing. The al pastor, pollo and bistec are pretty standard, enchilada is just another term for spicy meat but the arabes and orientales are not that common. They are the Mexican version of shawarma, spit-roasted and spectacular, just the right ratio of meat to fat with the best smokey-sweet-spicy chile sauce. Everything was served with big wedges of lime, sliced radishes and the best Mexican Cokes.