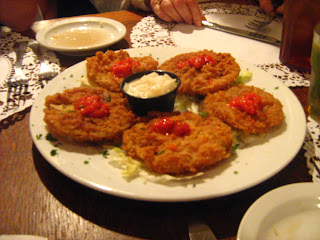 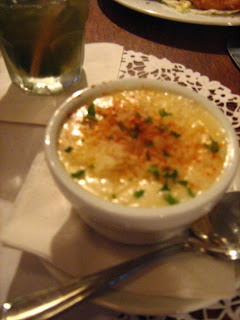 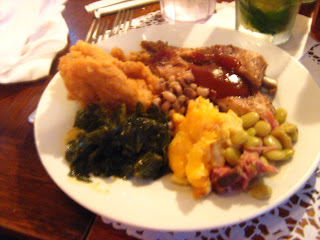 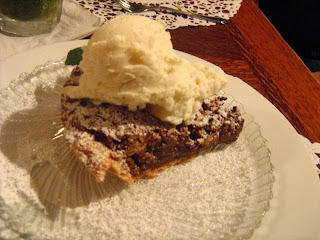 Like most self respecting current or former line cooks I cringe at the sound of TV celebrity chef catchphrases like fingernails on a chalkboard. It should be pretty obvious to anyone that's ever worked in a restaurant that what goes on with those shows has absolutely nothing to do with anything that happens in a working kitchen.

So I pretty much always expect to be disappointed when eating anywhere associated with food celebrities. Waking up at 9am to stand in line at Lady and Sons with truckloads of 60 year old Paula Deen devotees and fanny pack / golf shirt sporting tourists I figured my suspicions were right on.

But guess what, the food was great. And really affordable for a celebrity restaurant. And huge, with three floors and seating for at least 250 people. The menu was smaller than I expected, but makes sense for cranking out probably at least 1000 meals a day with consistency.

Started off with complimentary cheddar biscuits (needed salt) and hoe cakes (awesome). Fried green tomatoes with sweet onion relish, she-crab soup- delicious. Then time to line up for the buffet with the silver-haired masses. I would have liked to try the shrimp & grits or one of the other entrees but there was no way I was passing up that golden brown pile of fried chicken. Which was fantastic. Everything at Lady & Sons is fried in peanut oil and a really light batter and doesn't make you feel like you are going to die. The ribs were a bit of a letdown, sort of fatty and bland, but the sides were awesome. Greens, Black Eyed Peas and Butter Beans chock full of pork, perfectly cooked without being brown or slimy, awesome Mac & Cheese too.

Dessert (again, very small menu) was good too. Pecan Pie was killer. I'm not saying I'm going to go out and buy a set of Paula Deen cookware or anything but the food was great. Of course 16 hours later everything I just ate would be blown out of the water by the magic that is Mrs Wilkes Dining Room, but we'll get to that later.

Email ThisBlogThis!Share to TwitterShare to FacebookShare to Pinterest
Labels: lady and sons, savannah