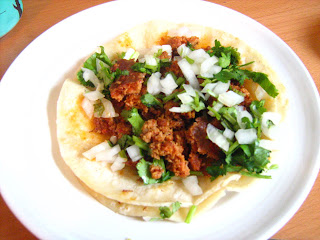 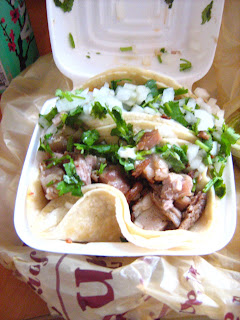 I've been noticing for at least 6 months the Savoy Deli & Produce Market on 18th st. below Rittenhouse square has had a board out advertising "mexican tacos, tortas, burritos, hoagies".

Now I stopped there once and uh.. it was sort of scary. The produce was in pretty bad shape and the place is always sort of dark and empty. Their main business seems to be selling flowers which look better than the brown rotting lettuce. And there's really no reason to go there as Sue's produce (one of the best in the city, love it) is 5 minutes away.

But I just couldn't ignore that sign. And good thing I didn't. My fear was at first reaffirmed as I walked in around lunchtime and it was empty again. The meats in the deli case looked kind of sketchy. I was presented with a crumpled menu and ordered 1 carnitas and 1 chorizo taco. The mexican gentleman who had been trimming flowers and unpacking carrots smiled and hurried to the back to whip up my tacos.

And wow, the food was much better than I expected.. all of the ingredients were fresh, the tacos were packed with meat, nice fresh tomatillo salsa- why aren't people lined up around the corner? I mean they weren't mind blowing, but as good as your average south philly taqueria, and it seems to be just the one guy that makes the food so it's probably consistent.

Don't be scared. Take out is the way to go.. rittenhouse square is right there so there's your dining room.

I'm glad you guys got around to checking this place out. Been a handful of times and it has yet to disappoint. The place has a great vibe.
-peter.

They also have tamales on the weekends! Tamales verdes and tamales de rajas, both with chicken.

sounds great Ill have to hit them up for tamales!

ever been to taqueria la veracruzana? it will blow your mind.