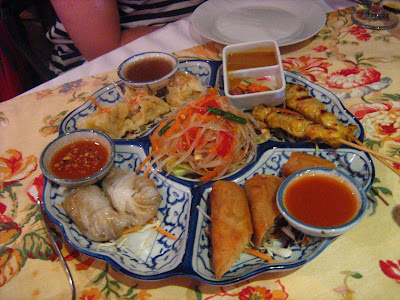 Cafe De Laos
Laotian and Thai on 11th & Washington. Awesome atmosphere plus it's BYOB. The Laos appetizer platter was awesome. Decent pad thai. Laos green curry with lemongrass was great. Go with the Laotian side of the menu here.

Continental (Old City)
Yeah, I"ve actually never eaten here before. I'm also someone that doesn't get super excited over seared tuna with wasabi mashed potatoes. My Calamari salad was HUGE and sort of boring- mostly lettuce and shredded carrots with an "asian" dressing. Not bad, just sort of safe food for tourists. Really not that different than eating at Applebees.

P.O.P.E.
Word is the POPE has a new chef/kitchen guy. The menu doesn't look that different but the sandwiches were damn good. Everything on multigrain bread which seems sort of Hippy for them but hey whatever..and they still have pierogies on the menu. As always great beer on tap and always friendly service which often makes the P.O.P.E. the choice over similar establishments.

One important thing to note is that they have *finally* started making a decent burger. None of that grade-F circus animal meat anymore.