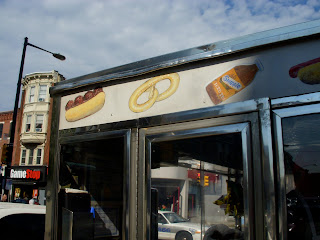 While "researching" half the hot dogs in Philadelphia over the past few weeks I came across a few surprises and a bit closer to my goal of trying every fish cake combo in the city.

Gus' Hot Dog Cart on 5th & south is a great stand and one of the few street vendors to serve the notorious combo. Steamed jumbo dog, grilled fish cake & mustard on a half of a hoagie roll. Gus' location is appropriate because he's about a block away from where Levis' hot dogs- birthplace of the fish cake combo - was located. 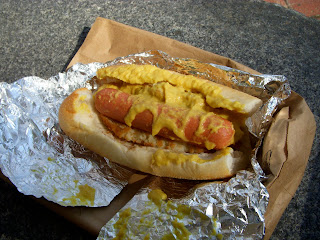 I also hit Johnny's Hots for the first time. I was a little stuffed from Gus' combo so I just got a dog with pepper hash. It was OK but didn't blow me away quite like the truck on 24th & passyunk. The bun was interesting though, more tooth than your standard bun - holds up to mounds of toppings - but not too bready or tough. I think the thing to get is the sausage- next time. 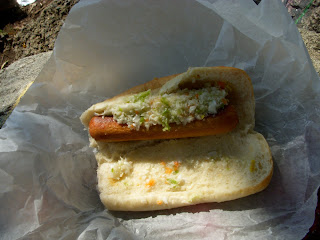 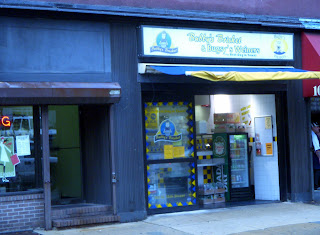 Bubby's Brisket and Bugsy's Weiner, a newer place on 15th street just north of Arch also does the combo, here the fish cakes are deep fried and served on top of a split dog on a steak roll. Great fish cakes, deep fried might be the way to go - but 2 of them plus the big roll is sort of an overwhelming amount of starch. 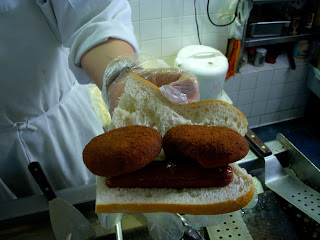 I finished it at home with extra mustard and hot sauce and a jug of iced tea. Also tried their plain hot dog which was a decent standard split & grilled dog. A casual walk-up take out joint catering to the local lunch crowd, nothing spectacular but probably the only place less than 5 years old that has the combo, good to see them keeping it alive. 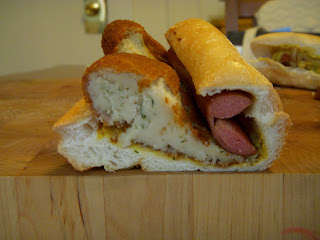 I still don't really get why the only people who have any chance of eating decent hot dogs in Philly are construction and dock workers having them for breakfast. Moe's, Johnny's Hots, Passyunk Guy, Texas Weiners, all closed by 5, some as early as 3. 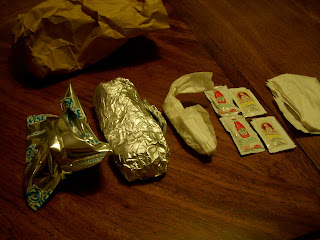 Little Pete's - a great place for a milkshake or a reuben at 4 in the morning - has a killer Texas Tommy as well. Toasted bun, split dog, lots of bacon and melted american cheese, came with a bag of chips and a neatly wrapped pickle. Tony Luke's also has a terrific Texas Tommy with wiz, and something called the Texas Smoked Hot that I wrote about a couple weeks ago, both of which are up there with my favorite Philly hot dogs. 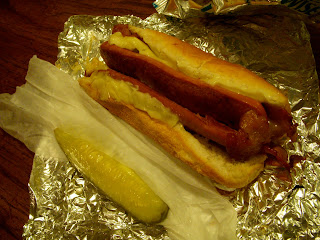 There's a few local hot dogs out there I'm still itching to try - Michael's Deli on 4th and Wolf apparently has a jumbo double Philly Combo with 2 hot dogs and 2 fish cakes on a full size italian roll. Also something called the Animal Farm which is a combo cheesesteak with beef, chicken, piles of bacon and cheese. I think after that it might be time for "salad of the week"...
Posted by hawk krall at 4:45 PM

These pictures makes my stomach to be filled with delicious hot dogs. All I can say is "YUMMY". Wish there would be some hot dog trucks that sells these dogs near our place.

It is excellent idea. I support you.

You really did a great job by posting the More Philly Hot Dog Research.Thanks of your nice information about it.