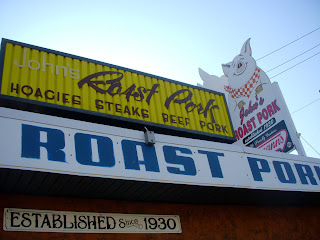 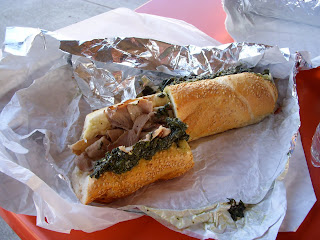 Believe it or not I had never actually eaten at John's Roast Pork until a week ago. Tried plenty of times, but usually got there 15 minutes after they closed the doors. One day this summer I even rode down there at 10 am and there's a big sign on the door, "on vacation".

Finally caught them when they were open and have to say John's lives up to the hype, especially the roast pork. It has a unique flavor like they might throw some cloves or something in the mix. I would rank John's a notch or two above Tony Luke's, whose famous roast pork is decent but fails to knock my socks off ..although their Texas Tommy is amazing. I would say John's and George's on 9th street are in the running for best Roast Pork that I've had. 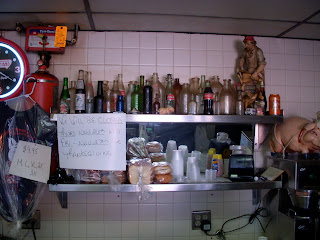 John's cheesesteak -winner of "best" many times over- was decent. Heaping piles of meat on seeded Sarcone's bread, very similar to Cosmi's Steak. I love Sarcone's Bread, especially for hoagies but I have to say I prefer a cheesesteak with a medium amount of meat and a softer Amoroso long roll, just sturdy enough that it doesn't fall apart.

Steve's Prince of Steaks comes close to a perfect cheesesteak for me, at least in the bread department, although I prefer the meat more thinly sliced. It's tough to pick a favorite, there's a handful of places that consistently do Roast Pork and Steaks really well, after that it comes down to personal preference and/or neighborhood loyalty.

But if you were wondering if it's worth it to take an extra hour for lunch, or wait in a long line to get John's Roast Pork before they close, the answer is definitely YES.
Posted by hawk krall at 6:11 PM

I think Paesano's on Girard is just as good if not better. One of the keys to eating these sandwiches are to let it rest for fifteen minutes or so to let all the juices soak into the roll. It's like cutting a steak open after you take it off the grill. Try the Arista at Paesano's. It has the long hots, whole suckling pig, sharp provolone and rabe. Not a huge fan of the dog over there, but everything else is awesome, including the roasted potatoes cooked in pork fat.

Yeah that sounds amazing, haven't been to Paesano's yet, word is they are opening a location in the Italian Market