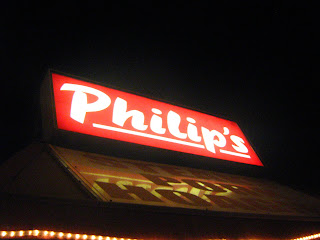 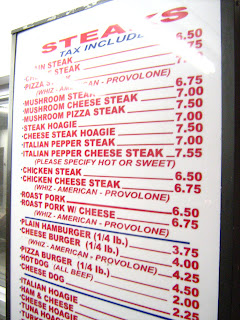 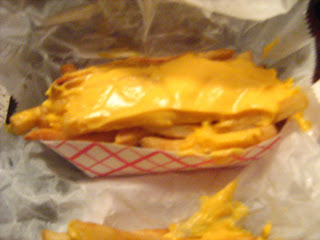 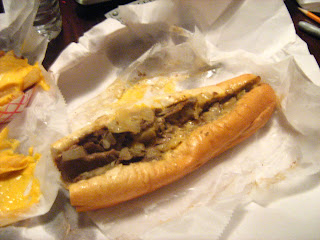 Cheesesteaks are a crazy topic here in Philadelphia. People will fight to the death over the best cheesesteak, the most authentic, the least racist, provolone or whiz, sarcone's or amoroso. Some fight for no cheesesteaks at all, and prefer the city to be recognized for its "higher-brow" culinary achievements, or argue the superiority of hoagies or roast pork.

For some reason a lot of writers and experts fail to mention Phil's . I didn't even know it was there until a friend proudly announced he knew of a "secret" spot at 22nd & passyunk that has no line and better food than Pat's or Geno's. A recent re-visit confirms that this is all true. It's not nearly as busy as the well known "cheesesteak vegas" of 9th & Passyunk. But it's open 24 hours and the cheesesteaks are fantastic.

More meat than Pat's but not so overfilled that everything falls apart. And they put so much whiz on my fries that I had to use a fork. AND they have fish cakes which for me is the mark of the real deal. I think the main reason Phil's gets passed over is that it's in a neighborhood that's not considered to be the best, but it's really not that bad and totally worth the trip.

i agree, pat's and geno's are rarely worthy of all the hype. philips are juicer and better than both of those.
my other favorite steak is from chink's in the northeast. they toast the rolls, use american cheese, and use fresh eye round that is more steak less steak-um.
also heard steve's prince of steaks are great.

the thing is that going to pat's or geno's is all about the hype.. the drunk jerks, limousines pulling up, signed greasy photos of b-list celebs, the atmosphere can't be beat, and really the food isn't that bad.

Pat's isn't bad.. but something about Phil's is super awesome. Never had Chink's I really want to give it a shot though.

Had a Cosmi's cheesesteak recently (they won "best of" last year) on a Sarcone's roll with longhots and provolone, pretty good but just doesn't have that whiz with / soft roll magic.

of course Pat's and Geno's aren't the best - their purpose is to exploit the cheesesteak for tourists - not that they aren't good steaks, but they are in NO WAY the best steaks in philly - Geno's won't even take your order if you just say "whiz wit" they correct you and say "with onions?"

I can't wait to try this Philip's Steaks - I'm from the northeast so I always eat Steve's - he IS the 'prince' you know! hahaha

Dati's water ice across the street is fantastic as well. I always go there for dessert after sliding a Philip's steak down my gullet. The water ice is good enough, but the homemade hand-dipped ice cream is out of this world.

I moved to South Philly two years ago and have been shopping this neighborhood the whole time and have passed Philip's so many times.

I am moving from Philly in six weeks and stopped at Philip's Steaks today (one more thing to cross off my Philly to-do list) and wow! So good. Now I understand the passion of the cheesesteak.

AND, they were nice, y'all. Didn't give me attitude or a hard time when I didn't know what to order or how to order it. I've heard that the guys over at Pat's and Geno's can be jerks if you say it wrong so I've avoided going there lest I cause a problem.

the neighborhood is a lil bad, i mean, you hear people talking about a cock fight pit/magarita bar accros the streat, you got philips, and you got a wide open parking lot to tail gate in.


amazing place to go if you are going to a eagles, phillies, or flyers game! the steaks are good, but can be debated on weather the steaks are the best! but over at philips, there is so much space, nobody is breathing down each otheres necks like at steve's, pat's, and genos, and somtimes jims!