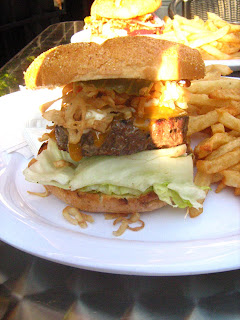 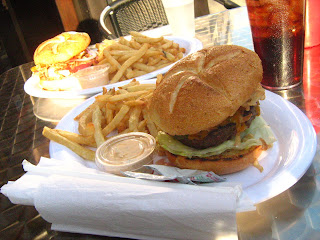 Being half drunk at 3 in the afternoon on a thursday, what's better than eating a giant burger in the sun on chestnut street? The decor at Goodburger is sort of a strange Qdoba meets Nightclub vibe complete with blaring dance music. But the burgers make up for it- bigger than a flat, miserable fast food patty but smaller and more manageable than the super fat restaurant burgers that put you to sleep. And lots of free toppings- crispy onions, pickles, all that jazz.

Earlier this year we crowned 5 Guys with "Best Burger" but Goodburger is a close second.The fries were decent and come with a mayo / remoulade deal which is nice, but nowhere near the perfection of 5 guys super crispy peanut-oil brown bag fries. But then Goodburger has beer and wine.

It's sort of unfortunate that the burger market in Philadelphia is already oversaturated. If someone could combine the two, add blue cheese & fried eggs to the topping list, keep the 5 guys fries, replace the club atmosphere with diner booths, keep the booze and put it somewhere that isn't center city, open 24 hours, and not be a chain, that place would win best burger of 2009.

I LOVe the recipe for perfect burger 2009. Can anyone get on top of that? Oh and make a great malt too as well as have delicious pickles. Theres nothing more french or Hawaiian than an egg on a burger. YUM

The SPTR has a breakfast burger w/cheese, bacon, fried egg and a side of hollandaise. It will probably put you into an afternoon nap situation.

I've yet to try this place, but it looks good. Wish the burgers weren't served on styrofoam, ick.

it's not, those are real plates!
give it a shot!