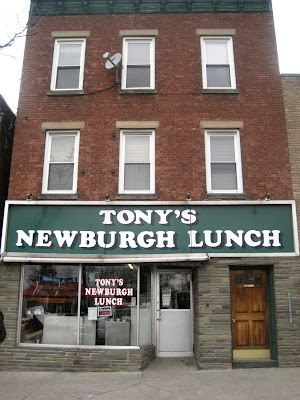 Our second stop in Newburgh NY, thought we'd give this more diner-like spot right on the main drag a shot. Pretty much exactly what you want at 9:30am in a small town during the early stages of a 12 hour drive. Long counter with colorful locals screaming about Hilary Clinton at the TV, super nice waitress that refills your coffee every 10 seconds. 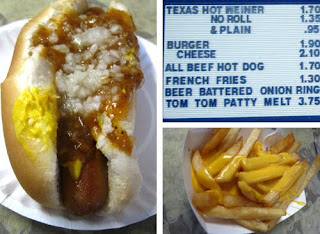 The Texas Weiner style hot dog (nice breakfast, huh?) was pretty good with mild sauce, onions and yellow mustard, but lacking the snap of the natural casing dogs down the street at Pete's. Standard frozen french fries topped with whiz for something like $1.45. But the real star was the Tom-Tom Patty Melt, a burger on sandwich bread with cheese and grilled onions, cooked on the flat top like a grilled cheese. Incredible. 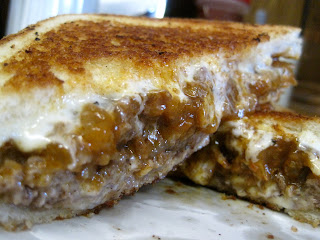 Apparently patty melts are not uncommon at old-school burger joints. Hamburgers were served on white bread for years until someone decided to put them on round rolls around 1916. I used to think of a hamburger on bread as sub-par but this is pretty much how I want to eat them from now on. The slider trend is getting stale, I think it's time for some waygu beef & fontina cheese patty melts guys.

Anyway Tony's is a great place to stop if you're up that way, they have breakfast too and pretty much everything on the menu is $1.65.

That patty melt was incredible! I was thinking about it when I watched this painful/hilarious video.