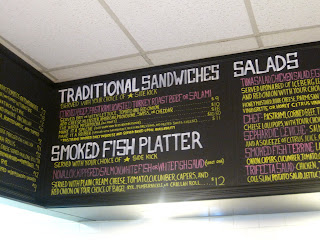 Delicatessen, in the former location of "Kibitz In The City" has been remodeled as a slightly upscale Jewish deli, and just opened a few weeks ago. Think Paesano's meets 4th Street.

We went with the classics - one turkey on rye toast, one pastrami, both with slaw and russian dressing. But there's also some newfangled business on the menu. The Philly Bagel Roll, a toasted bagel with wasabi cream cheese and tobiko roe; Bubby's Kitchen Sink Pho - probably the first ever viet/kosher fusion soup - rice noodles in broth chock full of pastrami, chicken and matzoh balls. The Jubano is exactly what it sounds like, a jewish cuban sandwich; then there's the Tuxedo Dog - a foot long all beef hot dog jammed with american cheese and wrapped in bacon. 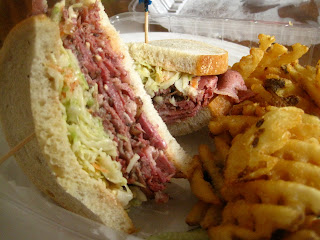 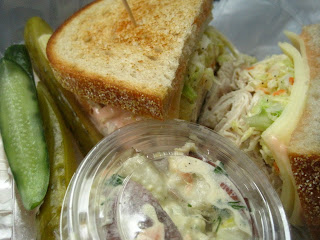 The pastrami was delicious, slaw was fresh and bright, sandwiches came with 2 varieties of pickle - I'm into it. Definitely be back for that hot dog soon. Open for breakfast & lunch. Around $9-12 for a sandwich but they all come with a free side (slaw, potato salad, apple sauce, latkes, etc) 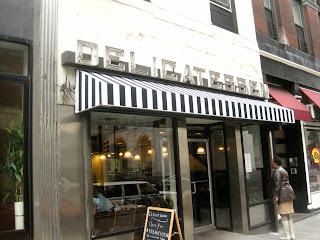 •check out the menu here
Posted by hawk krall at 3:59 PM

Love this blog, so it's funny to see how you covered the restaurant I work at!

crazy. well thanks for a great sandwich!