Drawing for Food Best of Philly 2008

Best Reason to Wake up in South Philly - Artisan Boulangerie
Artisan Boulangerie aka Andre's - In this strange Pink building across from the mexican taqueria, that's across from the Cantina, is Paris. Fresh baked baguettes and brioches and the best damned croissants in the city, I say this with passion and a little bit of spit. Also as if having the best croissants weren't enough, Andre happens to also have the best coffee in South Philly, because its french pressed fresh and it's make with the best fair trade organic ethiopian beans. He also makes a lot of the bread goods for Honey's and Di Bruno Bros. All that and he doesn’t even have a register yet. (kc)

Best weird diner that you've walked past 400 times and never knew it was there - Pinky's NY Cafe
This place never looks like it's open, and well, sometimes it's not. It really is comforting in a neighborhood full of rapid gentrification that those little places where the same 400 pound septa driver sits in the corner and reads the paper and complains about the eagles every single day still exist.

Pinky's is exactly that, dark and pink and packed with hospital staff and construction guys getting take out. The wait for food can be long in the morning but it's actually really good. The staff is friendly including "pinky" himself who I think is the original owner. Plus they have creamed chip beef on toast and grits so I'm sold. For lunch they have ny style deli sandwiches named after celebrities. Seems that 30 years ago in philadelphia the thing to do was open up a combination philly/ ny diner/jewish deli where we get things like pastrami omelettes with a side of scrapple.(hk) 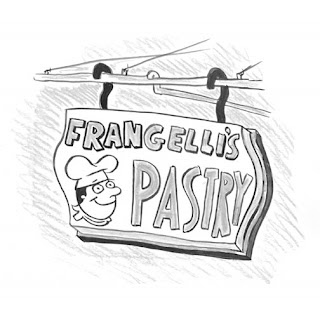 
Best quaint atmosphere that isn't annoying-
Cafe Con Chocolate
Very welcoming staff, in a an actual sincere real human being way, maybe because they're in the ghetto and need customers, get in there before it's full of yuppies like every place in my neighborhood (graduate hospital). Great huevos rancheros, and great coffee that comes in big giant mugs with delicious froth. Don't let the bagels & japanese specials throw you off, the mexican stuff is as authentic as anywhere else, plus they have a mariachi band. (hk) 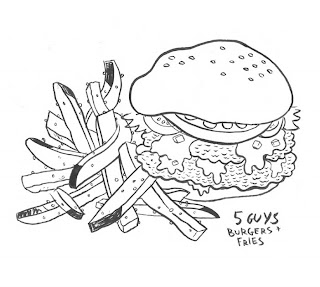 Best Burger - 5 Guys and Fries
5 guys and Fries, I crave you like a bad ex-boyfriend. I love a fancy pub/restaurant burger, but what is it about this greasy bag full of fries and smoshy double patty burger that makes me sweat with anticipation.(kc) 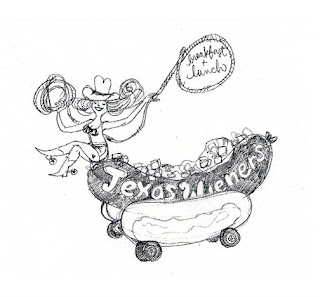 Best Hot Dogs - A.P.J. Texas Wiener Restaurant
APJ wins for pure atmosphere, the unique taste of the dog, the "greek sauce", and the fact that it's the last standing piece of history from what used to be philadelphia's red light district. They've been there since 1920 - should probably be a historical landmark, god forbid they lose their lease and we end up with a panera bread or something. APJ also splits their dogs (like my mom used to do) which creates more surface for sauce. They also do breakfast. Moe's in grey's ferry is close second, I love them for taking the hot dog seriously, but their hot dogs are really huge, and on giant rolls, it's like eating a meatball sandwich, and honestly I actually prefer a regular sized hot dog, so you can eat 2 or 3 or 4 with different toppings. Texas Weiners on snyder is solid as well. (hk) 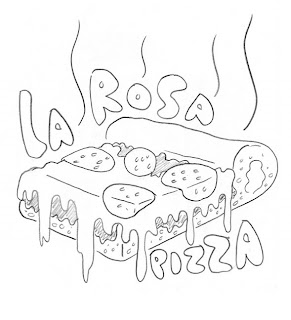 Best Square Pizza/Delivery Pizza - La Rosa!
I admit, I live in South Philly, it's hard to come across bad pizza and when you do, it's really really sad. But this little gem on Broad St. is the best square pizza in Philadelphia. Not too thick, not quite a sicilian and a crunchy crust. And a plain is still 7 bucks for pizza that feeds 3 bellies till its full. They don't even have a menu, you just tell the family what you want and they will let you know if they can make it. (kc) 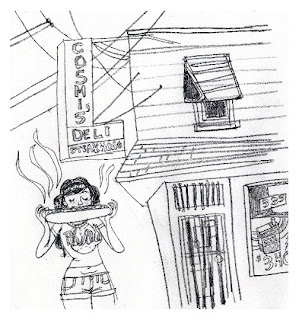 Best Hoagie - Cosmi's
I love cheesesteaks, but I really think a a good hoagie is the defining philadelphia sandwich. I eat a lot of mediocre sandwiches because most of the good stuff is down in south philly. Most pizza place hoagies are pretty boring, usually too many pickles or cheap meat or peppers with the stem still on them or something. The worst is the soggy bread that falls apart because they put 1/2 a gallon of vinegar on it. And then there's Wawa, Wawa hoagies are junk; stale bread, sweaty cheese, sketchy cold cuts, way too much mayonnaise - there's no reason to eat that in this city.

Cosmi's sandwiches are always piled high with quality meat and good seeded italian bread (I assume it's sarcones, if not sarcones has some competition). Everyone always picks sarcones, chickie's, primo as the best in philly, maybe for location or atmosphere but I honestly think Cosmi's is the king. I've had many, many Cosmi's sandwiches and they're always fantastic with the perfect balance of bread / meat / cheese / toppings and they have the serious italian stuff- prosciutto, mortadella, sopresetta, pepper shooters, etc -from a place that just looks like a corner store.(hk) 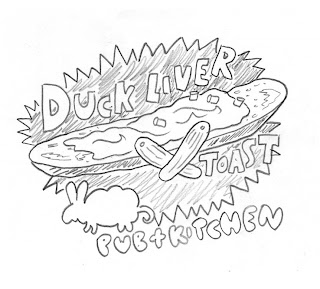 Best Bar Snacks - Pub and Kitchen
For 3 bucks I normally can't get duck liver toast with cornichons, or home made malt vinegar crisps. Which is a shame, because having this just makes me want to drink more.(kc) 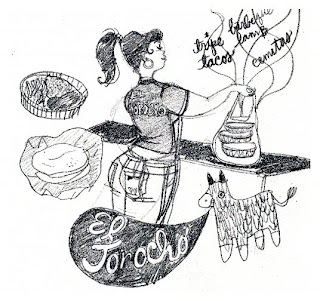 Best Mexican - El Jorocho
I used to eat here all the time a couple of years ago and it was always good, but now it's amazing. Stopped in the other night and the menu has expanded with all kinds of amazing stuff, Tripe tacos, Barbecued Lamb, Soups, 74 different mexican breakfasts, cemitas (mexican sandwiches kind of like a cuban). They seem to have re-arranged the dining room and expanded the kitchen, it was also busier than I remembered and the food was great. This place is the real deal and I just found out they deliver so get ready for 2009 to be the year of El Jorocho.(hk)


Best Sangria - Amada
Damn Amada, you make everything great. Like Cheese dipped in Cheese. But for this round, I'm giving you the sangria crown. I don't know if the fruit is soaked in vanilla or cinnamon or something, but nothing is more smooth and exotic tasting than Amada's House sangria. And I love all things served in a ceramic pitcher. (kc)


Best Sorbet - Southwark
Southwark, reknown for their excellent service and bartenders who make a well crafted drink, have my favorite sorbet in the city. I'm not a sorbet getting' gal either. Why go for icy water when you can have some kind of chocolatey sticky thing. But this sorbet, which changes daily, can be anything from cranberry champagne to orange Compari. It's always refreshing and surprisingly satisfying.(kc) 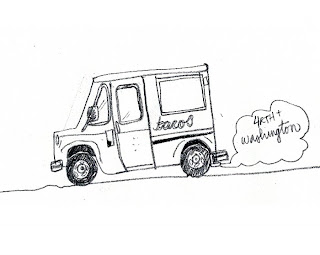 Best stuff we haven't eaten yet

Taco Truck
you know it's gotta be good.
4th & Washington

this is the only food thing that i truly look forward to reading. craig laban can suck it.

whoa, thanks?
I like laban though, he gives respect to hoagie shacks & food trucks as well as fine dining

I have walked by Artisan a million times and was always intrigued but never ventured in... I definitely will next time.

I live in South Philly, too, technically Newbold. I'd love it if you checked out my blog too... kitchenplay.blogspot.com

the taco truck is legit.

Thanks for the food advice and fabulous illustrations! My favorite won-ton soup is between 4th & 5th on Girard, China Star. Check it out late night (just be careful).
xoxo
julie@topstitch

ooh, thanks for a couple i haven't heard of! i'll make it a point to get there soon.

Artisan Boulinger Patissier, at 1648 S12th is the real deal. I tracked Andre from Anthonys Coffee House in the Italian Market, to this location. The world is finally noticing how good all of their pastry is. I think I might have spotted Rick Nichols in there one time. Only real butter in everything they make. My personal favorite is the Almond Croissant,

The almond croissant is my favorite too.

I rarely leave comments on articles, but your article encouraged me to compliment your writings. Thanks for the read, I will tweet your post and come back occasionally.

What is Wawa Customer Satisfaction Survey?

Customers reviews and feedbacks means a lot to the company, as the company wants to grow its business and now its really tough to survive in the market. So the company established and came up with www.mywawavisit.com to know about the services provided are really