Just in case you don't know, July is National Hot Dog Month which for me means hot dog overload, including several events to be announced. Along with Hot Dog Of The Week on Serious Eats I'm going to crank out some bonus posts of dogs I've enjoyed over the past year or so and haven't gotten around to writing about. 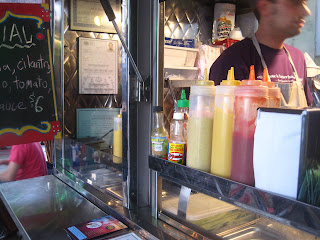 First up is Dapper Dog which I initially wrote about a while back when they first opened, but recently went back and was psyched about the quality of the dogs. They seem to have upped their game with more sophisticated toppings, and are using high quality garlicky all-beef dogs, no natural casing but all perfectly split & grilled. 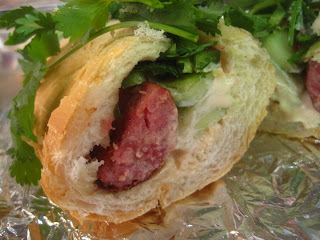 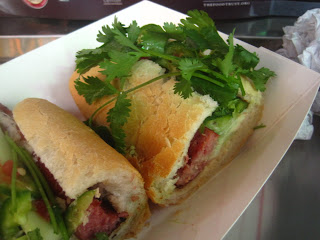 The use of hoagie roll rather than hot dog bun works with the sausage, the meat/topping/bread ratio still in the right zone and makes sense conceptually, more vietnamese kielbasa hoagie than hot dog.

Their new weekend location in Garden Variety is terrific, you can grab beer at the Foodery across the street and wolf down some dogs. Things were hopping when we were there.. I would look for Dapper Dog to be a solid presence in the Philly hot dog / street food scene for years to come.

Dapper Dog
Fri & Sat at 2nd & Poplar
Lunch at Temple U. 13th & Norris (only during school year)
Lots of special events - follow them on twitter for updates
Posted by hawk krall at 3:22 AM