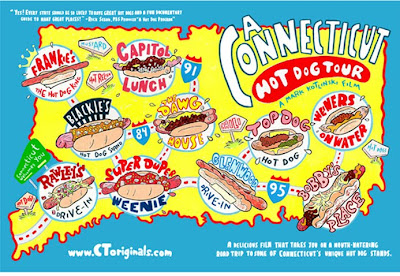 Just in time for National Hot Dog month, Saturday was the world television premier of Mark Kotlinski's Connecticut Hot Dog Tour on the Documentary Channel. It's an awesome film about 10 of Connecticut's best hot dog stands with some awesome DVD cover art (not sure if the art will air on TV.. looks like they have their own logo / title art..) 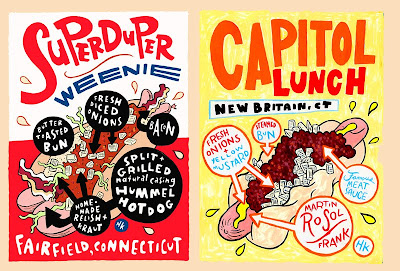 Last year I wrote about some of the stands on Serious Eats - Super Duper Weenie, a gourmet hot dog truck opened by a Culinary Institute Grad with a crazy connection to photorealist painter John Baeder, and Capitol Lunch, an old school joint that serves grilled natural casing dogs with "secret sauce". 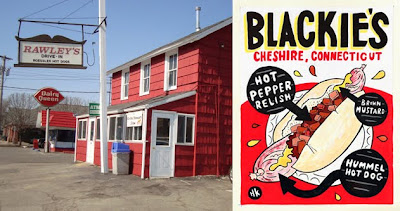 Other stands featured in the Doc are Rawley's, Top Dog (a hot dog shaped trailer) and the legendary Blackie's, a former gas station. You can actually buy prints of my artwork at the restaurant (much thanks to the Flavin family for making this possible!) or on my website.

Also, Mark recently did an interview about the film on the Faith Middleton Show on WNPR in Connecticut. I also chimed in over the phone with a few words about hot dog length and the craziest hot dog I've ever had. Listen here -