The Jerseys Are In 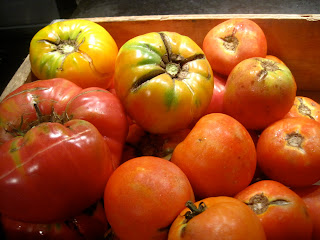 A week or so ago I was at Cosmi's waiting for some "soprasud" on seeded bread (next time you're there don't miss the hand written signs for "perjoot" and "gabagul" - not poking fun, I love that shit.. this is Philadelphia, not Italy ) when a truck pulled up out front and the tattooed guy behind the counter announced "da Jerseys are in!"

The "Jerseys" above (smaller ones on the right) are from the Italian Market, 50 cents a pound.. a bit banged up but fine for cooking. The Pennsylvania heirlooms on the left are from the Amish dudes at the Passyunk Square farmer's market (every wednesday 3-7pm) - 2.25 a pound for some GIANT yellow and red ugly ripe jawns.

Iovine Brothers at the Reading Terminal also has heaping piles of local zebra striped green, yellow, orange and dark red tomatoes for next to nothing. Another good spot for heirlooms is the saturday Rittenhouse Square market, and I'd bet Sue's Produce on 18th street has some good ones too.

So obviously we've been living off of tomato salad and gazpacho for the last 3 weeks.. plus I just turned that pile above into some killer "gravy" that I planned to freeze for the future but I'll probably just eat it all in the next few days.
Posted by hawk krall at 12:44 PM