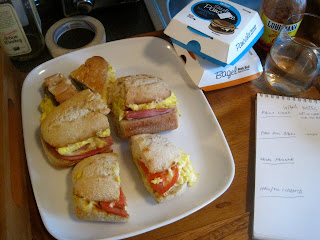 Serious Eats asked me to sample a mess of Wawa breakfast sandwiches for this recent article rating the country's best fast food breakfast sandwiches. They crowned White Castle's breakfast sliders (made with real, fresh eggs!) as the king, but Wawa's Ciabatta Melt received an honorable mention.

Here's some of the other sandwiches we tried. Overall the ones made at the sandwich counter (Ciabatta Melts, and the Philly Steak Egg and Cheese Hoagie) were far better than the heat lamp baked "Sizzli's". 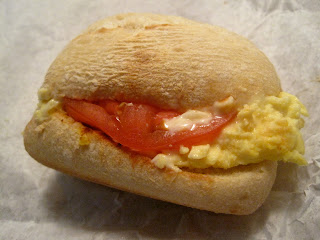 • Junior Ciabatta Melt
The mini version of Wawa's Ciabatta Melt, pretty affordable at only $2.89. I wanted to try one without meat to really taste the quality of the eggs. They look and taste like real scrambled eggs, and they aren't microwaved, instead they are frozen and "rethermalized". However they do it, much better than those scary discs you get at Dunkin Donuts, or even on Wawa's own Sizzli's.The Ciabatta rolls are great, and they really overstuff these suckers.

The best part is, because it's Wawa, you can add ANYTHING on to your breakfast sandwich. Tomato, turkey, ranch dressing, whatever they've got. There's even a button, when creating your sandwich on the computer, to "add italian hoagie" to your egg and cheese. Sounds like an adventure. I didnt have the balls to try it. 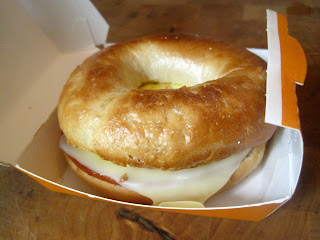 • Pork Roll Egg and Cheese Sizzli
My Jersey-born girlfriend took the first bite. I asked her what kind of cheese it was. "American, of course! What did you think it was going to be, Gruyere?" As if anyone would have the audacity to put anything other than American cheese (or Wiz) on a slice of pork roll.

Other than that, a pretty lame sandwich. The bagel was tiny and pretty dry, probably from sitting under the heat lamps for 6 hours. And the scary egg disc was no comparison to the delicious, fluffy "rethermalized" eggs of the Ciabatta. 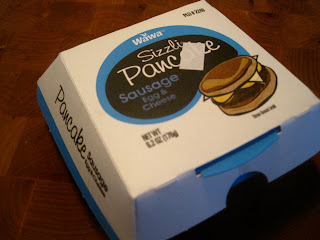 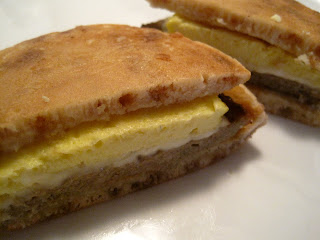 • Sausage Egg and Cheese Pancake Sizzli
Ripoff of Mcdonald's Mcgriddle but not as good. Nice packaging though, and much better than those scary microwavable shrink wrapped sandwiches that you would get at a 7-11 or a gas station.

The state of Wawa inside the city of Philadelphia is kind of scary. It looks like there's only 6 left. There used to be one on every corner. And the quality here is always a crap shoot. I used to eat Wawa hoagies all the time - only thing open at 2am after work - and never understood why anyone in Philadelphia (with real Hoagies around every corner) would ever eat them unless they had to. Stale bread, totally unbalanced sandwiches with hardly any meat and too many vegetables, or more cheese than meat, or so many pickles that the whole sandwich dripped in pickle juice.

But if you go to the Suburbs or Jersey, Wawas are like palaces. The size of a grocery store, with 8 registers and people lined up 10 deep for sandwiches.

It seems to me, you are right