Everything that you've head about this place is true. First of all, it's incredible. Authentic Szechuan in the middle of Olde City's douche-fest. And yes, it's face-numbingly hot. Hotter than anything any of us have ever eaten in Brooklyn, or China even. The owner Han is both super friendly and super hilarious. He told us how every other Chinese restaurant in the City is bullshit, because the food has no flavor, and his chefs are straight from Sichuan Province.

There is also a Gringo menu of General Tso's chicken and all that, but Han will tell you not to order it, it's there for the unadventurous. He sent us to Eulogy to pick up beer before our meal (it's BYOB, and Eulogy is happy to recommend beer based on what you ordered at Han) and passed out Chinese cigarettes to us out front after our meal. 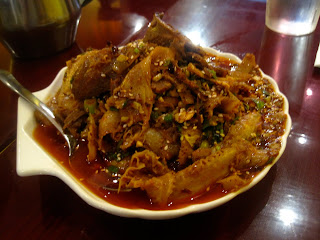 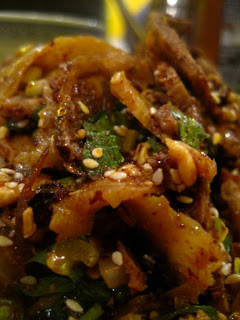 Beef & Tripe in Chili Oil
WOW. The hottest I have ever had, cold tongue and tripe - both super tender - swimming in chili oil, and dotted with szechuan peppercorns, numbs your entire mouth, but so god damn delicious. 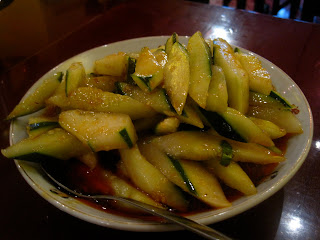 Spicy Cucumber
Great side, helps cool you down, at least until you get the wave of heat from the chili oil. But so addictive.

Dan - Dan Noodles
Brutal heat. Tossed in a firey paste tableside. LIke everything else here, just on the edge of bearable heat, but so good you keep going. 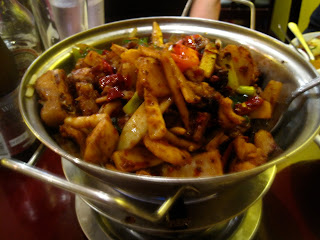 Rabbit Dry Pot Style
Oh yeah. Terrific. Watch out for the bones, but no big deal. This is the real thing. 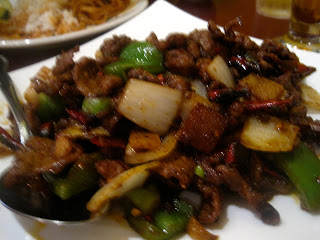 Lamb Cumin Style
This was my favorite. Lamb stir fry with Szechuan Peppercorns, whole dried chiles, and tons of cumin. Not as spicy as some of the other dishes, but still mouth numbing. 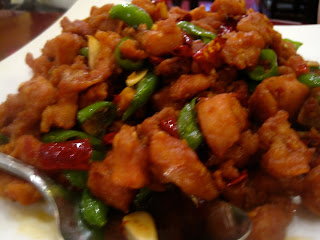 Garlic Seafood.
Mixed seafood in garlic-chili oil. Last dish to come out, by this time I was drunk and my whole mouth was numb.'

If you've thought about eating here but haven't made it yet, get on it! One word of advice- the portions are BIG, and also because they are so hot, you aren't going to finish the whole thing. 1 entree for every 2 people, and a side or 2 would be plenty. We took home half of our food, and it was even better the next day.

And if you bring someone who doesn't like adventure or spicy food, make sure you get at least 1 thing from the Gringo menu, or just let them fill up on rice - because the Szechuan dishes are not for the culinarily challenged. By the way, it's also a really nice place, and the service is fantastic.

Han Dynasty
twitter.com/handynasty
108 Chestnut
(also 2 locations in the suburbs)
Philadelphia
Posted by hawk krall at 10:53 AM

We feel lucky to have Han D2 up here near us in the burbs, and now you've got me craving rabbit, lamb, chicken with hot peppers and dumplings in chili oil. Num Numb!

hi, you have nice blog.. u can view also mine..http://akoniwares.blogspot.com