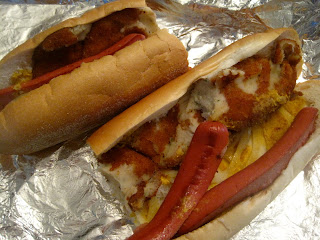 Another stop in my quest to eventually eat every Philly Combo (aka Philly Surf and Turf) in the city. If you don't know, the Philly Combo is an old Philadelphia hot dog variation that consists of a hot dog and a potato-fish cake on the same bun, usually with mustard and onions, sometimes garnished with pepper hash. 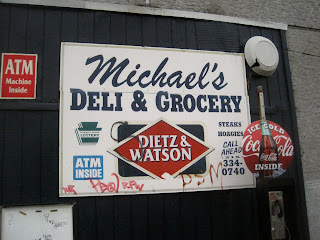 At Michael's Deli at 4th and Wolf - an unassuming South Philly corner store with video poker and a kitchen in the back - this is the only way to get them. 2 smashed fish cakes, and 2 split hot dogs on a hoagie roll, with mustard and onions.

The result was better than I expected. The fish cakes were fresh (not too fishy) and Dietz & Watson dogs were decent. The roll was nothing to write home about, and the option of pepper hash would have been nice to add some moisture to the sandwich. But overall a success. 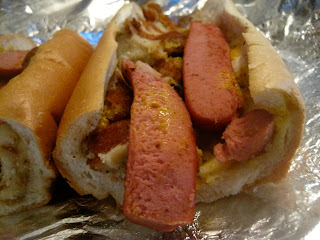 A tiny South Philly corner store with juice, cigarettes, and a few dusty groceries, walking in you might be surprised that they even serve food, let alone a giant menu with a zillion different hoagies, cutlets, burgers, hot dogs, wings, breakfast, pasta and even pizza. I don't really understand where they keep all the food.. maybe a kitchen or walk-in freezer in the basement?

The cheesesteak we also tried was just OK, but some of the concoctions on the menu have me curious enough to go back.

Then for breakfast there's scrapple and eggs, pork roll, creamed chip beef, baloney & egg. And everything is cheap as hell.
Check out the crazy menu here (with music!) -
Michaelsdeliphila.webs.com

•Drawing For Food - Fish Cakes from Gus's Cart and Bubby's Brisket
•Drawing For Food - Nicky & Pete's Famous
•Hot Dog Of The Week - Philly Combo
•Meal Ticket - Outside The Box (Pizzaz at the end of the article)
Posted by hawk krall at 11:46 AM

That is right in my hood. I may need to check out that surf and turf. Looks pretty decent.