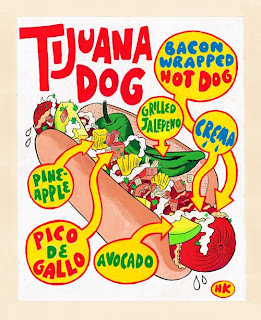 Latest hot dog painting & post over at Serious Eats. If you missed last week I did a post about Flo's in Maine, and crowned it the country's best hot dog which got a bunch of people angry.

Mexican hot dogs are really, really good and I haven't seen them anywhere in Philly other than SPTR. There's gotta be someone cranking them out of a tacqueria somewhere, or at least there should be.

In Los Angeles they've been shutting down and arresting mexican hot dog vendors, even putting them in jail, because apparently cooking the dog with raw bacon wrapped around it (the bacon gets fully cooked with the dog on the grill) violates health code. Sounds more to me like an excuse to round up mexicans. Watch this video about the controversy featuring Drew Carey.
Posted by hawk krall at 7:45 PM

the moon looks like a hot dog with golden flies. i put mustard on it and sat down and cried. night night