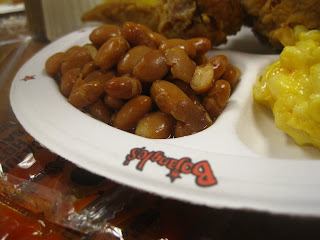 Last time I was down south it was for hot dogs, literally stopping at 6 or 7 places a day with no time (or appetite) to stop at every awesome BBQ place and all the beautiful looking southern fast food chains that still look like 1970 like Bojangles. If you ever find yourself in the position of traveling the country eating only one food item for weeks at a time you'll see that everything, ANYTHING else looks like the best thing in the world. 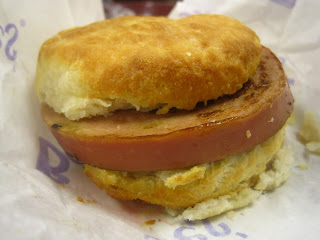 Last weekend we were heading South (well, Delaware to Virgina Beach at least) and stopped at the first Bojangles we saw. I was pretty psyched as fried chicken is up there with my favorite stuff and Philly is really almost totally devoid of the real thing. I got even more excited when I saw the signs for the "$1.29 Fried Bologna Biscuit". 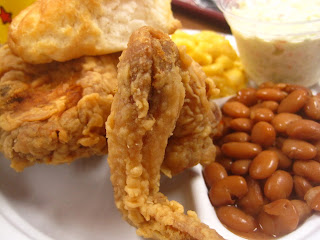 To make a long story short, like most places I talk up to my girlfriend for 8 hours to convince her to go there, it sucked. The Bologna meat tasted kind of sketchy, chicken not that crispy, sides had no flavor. We would have been better off at the Popeyes on Broad & Snyder. Even the BISCUITS are better at Popeye's. The only thing slightly "southern" about the experience was when I asked for hot sauce the guy gave me 12 PACKETS and asked if I wanted more.

Most of you are probably thinking "of course it sucked, it's fast food" but there's something about regional mini-chains that fascinates me, like the Greek-themed pastrami burger joints in Utah I've been reading up on for a freelance project. And I haven't ruled Bojangles out, maybe the good ones are further south??
Posted by hawk krall at 10:33 PM

aww what a shame! I remember really enjoying Bojangles biscuits on a road trip a few years ago

Where did you stop for this? I lived in the south-east corner of VA for many years and it's not really known for southern cooking. My rule of thumb with where to find the kind of chicken & other fried bits that you're looking for is to use the frontlines of the Civil War as my boundary. Norfolk, VA Beach, DelMarVa were all firmly in Union hands for most of the war...the real southern cooking starts in Suffolk and goes west from there.

I lived in SLC for 5 years. Crown burger was a perfect hangover cure. Some serious calories, and I miss the cheap gyro spots everywhere.