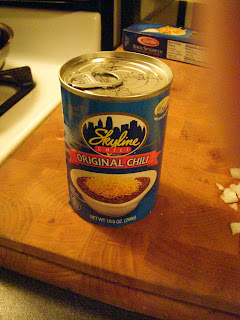 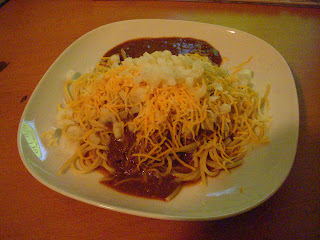 My friend Tim just brought back some Skyline Chili in a can from Ohio.
Cooked it up with some spaghetti, shredded cheese and raw onions in the real deal Cincinnati style. Apparently you're supposed to eat it with oyster crackers but I was all out. How something popular in New England made it onto Ohio chili blows my mind.

Anyway the taste is kind of insane but really good. It was similar in flavor to the "Greek Sauce" I've had at Texas Weiner style hot dog joints in PA and New Jersey, but much stronger. It's really hard to tell what's in there but I would guess cloves, cinnamon, maybe even chocolate? This kind of Chili has nothing to do with mexico but it sort of reminds me of mole sauce. I always thought chili on spaghetti sounded disgusting but guess what it's great.

Washed it down with some Philadelphia Brewing Company Coffee Porter.. talk about pairing food with beer. I still have 2 cans of chili left, next step is putting that stuff on some hot dogs. 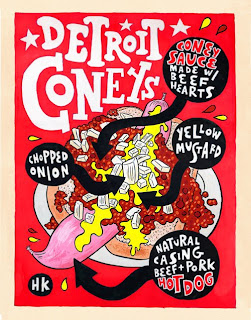 Perfect timing because I just featured the Detroit Coney for Hot Dog Of The Week, which uses a very similar chili traditionally made with beef hearts & kidneys but almost never served with cheese.
Posted by hawk krall at 6:41 PM

The canned stuff was really good, of course I've never been to cincinnati, so I was psyched to try cincinnati chili.

Made some from scratch the other day and it was pretty good but still missing something.

sam- thanks! been reading your comics too theyre great!