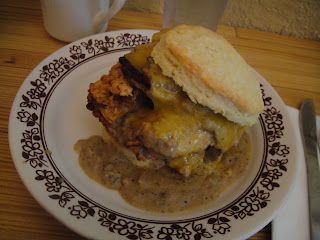 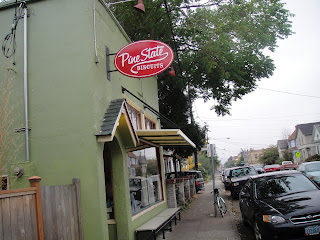 I've never been a big breakfast person, and for most of my life I've totally ignored the whole breakfast is the most important meal of the day thing. The only times that I make an exception to my no food before noon rule is when I'm on vacation, and oftentimes I end up kicking myself for not venturing into the world of breakfast foods more often.
On my last day in Portland I found myself awake pretty early in order to make a flight and have one last meal with the friends that I was visiting. We made our sleepy way over to Pine State Biscuits for an obscenely early breakfast that was one of the best that I've ever had. Their signature sandwich, the Reggie, sounds like a prime candidate for This Is Why You're Fat but it tastes like a dream come true. A giant flakey biscuit topped with fried chicken, bacon, cheddar, and the best country gravy I've ever had. The biscuit is tinged yellow from all of the great butter that goes into it, the bacon is cooked perfectly, treading that fine line between chewy and overdone, and the gravy has enough coarsely ground black pepper to make it borderline spicy. This sandwich would have been great even if the chicken wasn't, but the chicken itself was amazing. It was a boneless breast which tends to dry out easily, but this one was a triumph. Moist, crisp, and perfectly seasoned with hints of vinegary hot sauce and the tang of a possible buttermilk soak.
It's been a week since my last Reggie and I have to say that there hasn't been a morning that I haven't woken up and craved it. Next time I'm in Portland I'll have to go for the Reggie Deluxe that tops the whole thing with an over easy egg.
Posted by Caroline at 1:26 AM

I used to think chicken for breakfast was really strange but that looks amazing.

This place is very, very good.