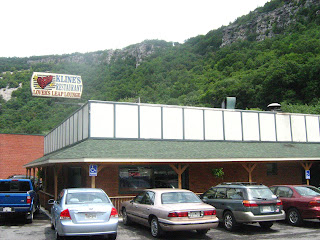 On the way home from camping we were hung over and dying for some diner food. Stopped in Cumberland, MD but the only place open didn't serve breakfast, and when we asked the waitress where to go she told us "Mcdonald's". Kind of hard to believe that an old mining town in the middle of nowhere full of old guys in VFW hats doesn't have a diner. Anyway it took an hour but we found the real deal about a mile outside of Cumberland on route 40.

Kline's restaurant is by the railroad tracks under a giant cliff. The "Lover's Leap Lounge" is to the left when you walk in and was filled with previously mentioned old dudes drinking beer at 10:30 on a Sunday morning. The restaurant itself was packed to the gills looked like the real thing. Everything on the menu was around 5 dollars and the food was incredible. 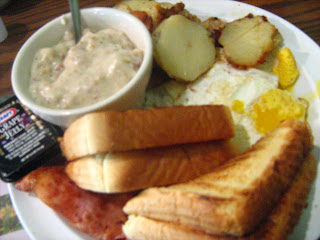 I had country ham & eggs with texas toast and noticed "gravy...75 cents" on the side order menu. Had to see what that was all about and she said, "Oh hon, that's not what you think it is, it's sausage gravy".. even better. Strange because there is no biscuits or biscuits and gravy on the menu. The food hit the spot, real slices of ham, amazing sausage gravy, even the home fries were fantastic and definitely made from fresh potatoes. In fact I'd guess most if not all of the food here is made from scratch.

this is my uncles restaurant!
Klines is the greatest ever! so eat there! <3
I LOVE YOU UNCLE GARY! :)