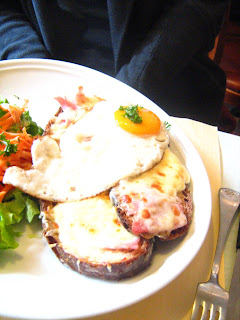 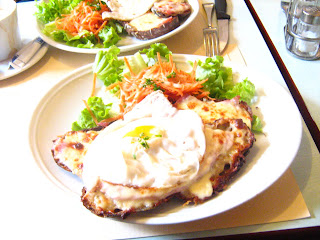 Breakfast in france usually means a croissant and some coffee. which is great but if you're a filthy american like me you want a giant plate with eggs and a few varieties of meat all cooked in fat along with your bread. So I was happy to find a little tobacco/lottery stand a few blocks from our hotel proudly advertising "petit dejeuner" including "fried ham and eggs".

Past the old french guys smoking and drinking beer at 10 oclock in the morning were a few tables. We sat down and ordered some coffee and croque madam sandwiches which if you dont know is a grilled/toasted/warm ham and cheese sandwich with an egg on top and sometimes bechamel sauce.

The guy at the counter took a big swig of wine and walked into the back to cook up our sandwiches, which were damn good. nothing fancy just good french ham slathered with cheese & topped with fried eggs. and even a little side salad.. pretty awesome for a newsstand full of smoking drunks. Oh and the coffee in france is better than anything else, I dont know why, maybe it's in the water or something, even the stuff that comes out of vending machines tastes like magic. 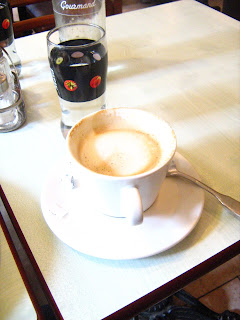